For a brief, but eventful 48-hour period between 18 and 20 April, the European Super League (ESL) held the world’s attention. The proposed 12-team league consisted of many of Europe’s most prominent soccer clubs and represented a clear move to funnel more attention and money toward those teams that were closely connected to the sport’s international popularity. The plan was designed to engender excitement among fans, as it would pit the world’s best teams against one another on a more regular basis without group drawings that could result in uneven and random pairings in the Champions League. Instead, the announcement received near-unanimous disdain from the public and sports world alike because it was immediately viewed as an existential threat to the continent’s current premier competition, UEFA Champions League, and as a serious risk to the game itself.

The strong negative reaction led nine of the twelve clubs to publicly withdraw and apologize for their planned involvement. National and international sporting bodies welcomed these teams’ decision to withdraw, but continue to pursue repercussions against all the teams that pursued involvement in the ESL. Fans also remain upset, calling for changes in ownership and for more fan control over the teams’ operations. Although the three remaining teams remain publicly committed to the idea of the ESL, its future prospects appear dead. 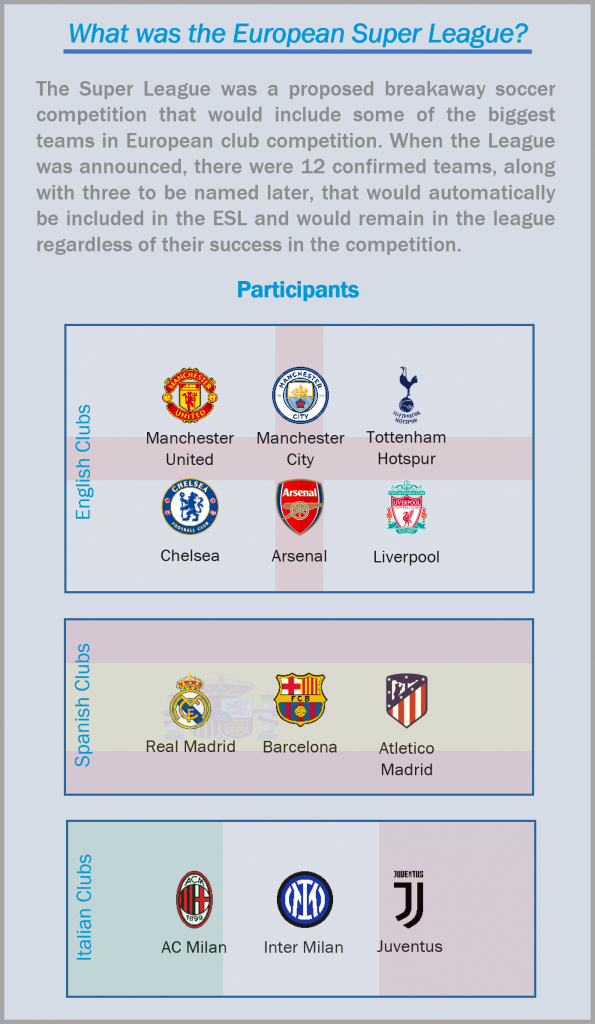 We assess that the underlying reason for the ESL’s failure is the league’s and its partners’ failure to adequately evaluate and understand all stakeholders in the endeavor. Specifically, neither the ESL’s primary financier, JP Morgan Chase (JPMC), nor the clubs themselves seemed to recognize that the fans are the critical stakeholders in European soccer and that their reaction to this proposed seismic and sudden change in a sport that is considered by many in Europe to be sacred would result in mass opposition and anger. The failure to properly evaluate all stakeholders and their likely reactions to a new and profitable endeavor is no longer just a program management oversight, but a potentially disastrous reputational vulnerability. An ESG+ framework that fully evaluates all business decisions for undiscussed or unexpected reputational risks is critical to mitigating reputational risk – especially in an endeavor this significant and important to so many fans.

The Bank: Failure to Identify Stakeholders

Prior to its creation, the ESL sought significant financing to ensure the stability of its initial operations and the security of its future profits. JPMC, which had strong relationships with many ESL member teams’ leaders—including Real Madrid’s president, Florentino Perez, and Arsenal owner, Stan Kroenke—was the league’s planned financier. The allocated loan amounted to roughly $4 billion, purportedly for infrastructure improvements and the clubs’ recovery from the impact of the Covid-19 pandemic. Each team would also receive a $165 – $248 million welcome bonus from the bank for joining the league.

JPMC stood to make nearly $3 million per week for 23 years in interest payments from the ESL clubs, which represented one of the most lucrative sports financing deals in history, but the profit most likely blinded the bank to potential blowback from fans. JPMC chose its course of action based on common standards of due diligence and ESG evaluation. On the surface, standard due diligence and ESG concerns were minimal. The ESL represents 12 teams with revenues in the hundreds of millions of dollars and an initial estimated market value of just under $1 billion. A $4 billion loan to help sustain the league’s initial operation appears reasonable and financially beneficial. Even after a disastrous 2020, the financial foundations of the participants appeared solid. From an ESG perspective, all participants are actively engaged in promoting inclusivity and access to soccer, as well as current social causes. The team’s public profiles are positive, and they all hold immense influence and popularity at a local and global level. Unfortunately, these surface-level evaluations failed to account for the reception the idea could (and ultimately would) receive. More importantly, these assessments failed to factor in how the public’s perception of the plan would impact its overall value and, subsequently, the reputation of the bank itself.

US Franchise Model versus the European Club Model

One of the key aspects that exacerbated JPMC’s failure to accurately assess potential blowback to the ESL was its inability to differentiate between US and EU soccer operations. As announced, the ESL was designed to follow the US model of operations, with each league member guaranteed a share of its revenue. The structure effectively provided participants a significant financial motivation to perform in the ESL over their domestic leagues or other European competitions, thereby minimizing the importance of the promotion of a unitary model, in which the ESL could potentially field expansion requests from other European teams who wanted to join the seemingly lucrative league.

JPMC is accustomed to the US model and therefore, failed to anticipate the negative reaction from European audiences. The bank also failed to understand the new league’s potential to dramatically and negatively impact the participants’ other, domestic competitions, which are a draw for European fans. Although proponents argued that the competition was designed as a supplementary challenge for Europe’s top clubs that would increase revenue for those involved, the argument rang hollow because of the clear incentives ESL participation provided which domestic competitions could not match. By creating a US-style competition, JPMC effectively supported not only the promotion of a single league above all others in Europe, but also the dilution of each country’s domestic competition. JMPC also failed to recognize that its own identity as a US bank added further fuel to the portrayal of the ESL as the Americanization of Europe’s football leagues.

JPMC also failed to understand European fan culture and how it would affect the league’s public reception.

In European football, any team, regardless of the size of its budget or fanbase, can compete in the country’s top domestic league and participate in top pan-European competitions based solely on its performance on the field. European teams play in a promotion/relegation system, where bad seasons lead to relegation to a lower league for even the most well-funded teams and success allows smaller clubs to rise. Furthermore, if a team finishes at the top end of the standings in its premier domestic league, it can participate in a Europe-wide competition, like the Champions League or the Europa League, which provide millions of dollars in additional revenue to participants.

“It is not fair when one team fight, fight, fight, arrive and the top and cannot qualify because success is already guaranteed for just a few teams.”

Fans across Europe immediately saw the ESL as a move by football’s premier names to separate themselves and their revenue from the rest of Europe. They flooded message boards with negative comments and mobilized in force to disrupt games. Players and coaches from ESL clubs and across the continent also reacted negatively to the proposal and shared their frustrations about the idea publicly, uniting around the slogan, “FOOTBALL IS FOR THE FANS.” This strong, adverse response to the ESL caused most planned participants to issue heartfelt apologies and withdraw from the proposal, which subsequently led fans and players to jointly celebrate the league’s demise.

Although JPMC prides itself on being a responsible citizen in the community, it failed to recognize how Europe’s fans would view the new competition. In addition, JPMC failed to recall the negative fan reaction and protests after it agreed to finance the purchase of Manchester United by the US billionaire Glazer family. CEO Jamie Dimon admitted the bank was wrong to finance the league and that it failed to understand the passion fans have for the promotion/relegation system. Instead, JPMC focused on the monetary potential and ignored clear reputational risks associated with its involvement, which resulted in a downgrade of the bank’s sustainability rating from “adequate” to “non-compliant.” Future financing opportunities associated with European soccer are unlikely to materialize as long as the public remains upset about JPMC’s involvement in the ESL.

How to Avoid a Super-League DISASTER

Traditional ESG-compliance investigations are not flexible, and they expose companies to reputational risk. Standard ESG-compliance investigations rely on frameworks that previously proved successful in a business’s primary market, but  they often do not account for the culture and business climate in other locations. Blind spots are common and hard to overcome unless the business consults with regional and sector-specific experts to help understand the full scope of the company’s investment and possible repercussions, including understanding stakeholders unique to the proposal.

Without context, a competition that pits the most talented and highest profile teams against one another appears to be a worthwhile investment and a win for all parties involved. However, were JPMC to have involved regional sports consultants with a cultural knowledge of the sporting landscape in Europe and no financial stakes in the league, the bank would have been more likely to anticipate the potential blowback and identify its own blind spots.